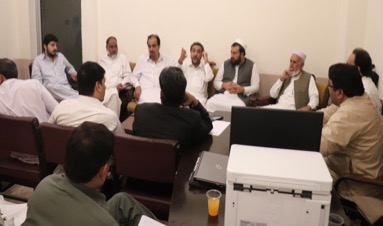 A general meeting of the Executive Committee of the Local Councils Association of Khyber Pakhtunkhwa with District Nazmeen was called on the 1st of October, 2018 at the head office of LCA KP by the President, Mr. Himayatullah Khan. The executive committee members and district Nazmeen discussed multiple points for government consideration regarding changes in local government system. The meeting included discussion on Abolition of District Tier of Local Government & Discussion on the Tenure of the LG. It was decided that the District Tier of Local Government shall not be abolished as it is against the spirit of Constitution of Pakistan and Democracy. Members also agreed on the point that Local Government shall complete its tenure. A point was also raised that LCAKP shall be taken on board in drafting the new Local Government Act.