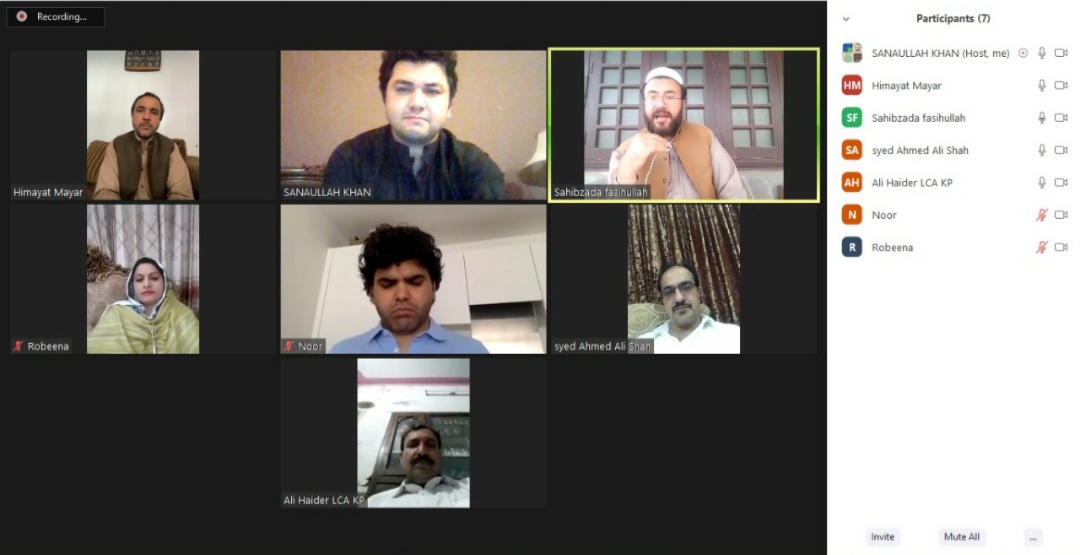 MINUTES OF THE MEETING

The executive committee meeting for the month of June 2020 was held on June 24, 2020, via Zoom Application where senior executive committee members participated (Annex A for Participants). The meeting aimed to discuss the sustainability plan for LCA KP and brainstorm the ideas on how to make LCA financially sustainable when the current project ends by end of the current year. The meeting started at 4 PM Pakistan Standard Time.

Mr. Noor started with giving background of the meeting which was held between Mr. Ivor Wells and executive committee members on 3rd June 2020. He said that after that meeting Mr. Ivor has developed few documents which are sent to the members for their review and feedback. He said this meeting is very important because the points which are discussed here will be forwarded to Mr. Ivor so that he can further work on developing financial strategy for LCA.

Mr. Mayar said that this meeting is very important as the topic under discussion need to be addressed on priority bases. He said that after December 2020, when the current project ends which is funded by EU/CLFG, how will LCA KP going to sustain its self. He said it is important for us to think about ways on how to generate funds for the association. He discussed the following points for the sustainability of LCA.

a) Membership fee:
Mr. Mayar said that is it very important for LCA members to pay their membership fee on time. He said it is very unfortunate that in year 2019 only few members paid their fee and majority did not. He said after finishing of LG tenure, it is now very hard to collect fee from members as some members has lost interest in the LG system.

b) Donations:
Mr. Mayar said we can collect donations from the ex-local government members by inviting them to Peshawar or by visiting to their districts and by distributing IEC materials among them which will contain all the information and achievements of LCA written in it. Once members know about the role of LCA they will happily donate to LCA for its sustainability.

c) Grants:
Mr. Mayar said that as Government of KP has already issued a notification in which it was decided that LCA KP will be given grant at source from LG annual budget. He said that it is failure on our behalf that we didn’t follow it properly and did not get our funds on due time. He said we need to follow that notification so that we can get those funds, which is enough for LCA to sustain its office expenses. He said LCA need recognition in Local government Act. That would only be possible if we start lobbying with members provincial assembly and make it happen.

d) Donor Organizations:
We need to prepare proposals and contact donor organizations, such as USAID, GIZ, UNDP, European Union etc. to look for projects, he said with elections due in the province, government and different donor agencies will invest in capacity building and awareness about local government. LCA KP should seize this opportunity and clinch some projects as LCA has vast experience and expertise to handle such projects.

e) Time Extension:
Mr. Mayar requested EU and CLGF to extend the current project till end of 2021 as half of the year 2020 has been affected by corona pandemic and most of the planned activities has not been done effectively. He said with elections coming soon, it is important for this project to be in place as role of LCA in the coming elections will be very vital in different districts and newly merged FATA districts.

Mr. Fasih Ullah said that I have gone through the documents which Mr. Ivor has sent us but I need more time to study it and then give my feedback on it. But he said I want to second Mr. President and his suggestions that it is important for LCA to look for potential donors rather wholly solely depending on membership fee. He said I am suggesting to have a meeting in Peshawar in which we invite ex Local Government members and ask for donations for LCA, but in order to get donations we have to show them what our achievements are.

Mr Ahmad Ali shah said that I believe membership fee is has very important role in the sustainability of LCA, we need focus on collection it, if we properly collect the membership fee from our members we can support our office expenses via it. Secondly he suggested that Board of governors and general body members can play active role in collecting funds for LCA.

Miss Shaheen said that recently we have extended women development committee and conducted one training session. She said that we can contact parliamentarians in order to get grands for LCA KP from the government.